Here are the top points of this big story:

The ATR 72 twin-engine turboprop aircraft plunged into a steep ravine, disintegrated. And burst into flames in the central city of Pokhara.

The plane, operated by Yeti Airlines, was flying from Kathmandu, the capital of Nepal.

Yeti spokesman Sudarshan Bartoula told AFP that 15 foreigners were on board, including five Indians. Four Russians and two South Koreans, with one passenger each from Argentina, Australia, France and Ireland. The rest were Nepalese.

All the five Indian passengers on the plane hailed from Ghazipur in Uttar Pradesh. One of them, Sonu Jaiswal, was apparently doing a Facebook live shortly before the flight crashed. He is among the dead. The same video is also available on his Facebook account, which has not been verified.

Nepali journalist Dilip Thapa told NDTV that the fire in the wreckage has made rescue operations difficult. Nepal’s Prime Minister Pushpa Kamal Dahal called an emergency Cabinet meeting soon. After the ‘major’ accident and the Nepalese government set up. A five-member commission of inquiry to investigate the incident.

According to the Civil Aviation Authority of Nepal (CAAN). The took off from Kathmandu’s Tribhuvan International Airport at 10:33 am.

The plane was close to landing at Pokhara Airport, when it crashed into a river gorge on the banks of the Seti River. The crash occurred about 20 minutes after take-off, with speculation that the plane might have landed. The flight time between the two cities is 25 minutes.

Nepal’s airline business has been plagued by concerns over safety, and inadequate training of staff. The European Union has placed Nepal on a flight safety blacklis. Since 2013 after the International Civil Aviation Organization (ICAO) raised safety concerns.

Ordering a ban on all flights from the Himalayan country into its airspace.The news agency AFP reported that hundreds 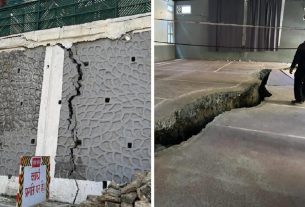 “Didn’t Walk For Myself Or Congress, But…”: Rahul Gandhi At Yatra Finale